Everything you need to know about muscle structure, signal characteristics, types of EMG, and applications.

What is the history of EMG?

The first notable event in light of the origination of electromyography (EMG) was in 1771, when Galvani discovered that electrical stimulation of animal muscle tissue produced contraction.1 Six decades later, Emil du Bois-Reymond learned that electrical activity played a role during a voluntary muscle contraction.2 The first recording was done by Marey in 1890.3 Commercially available EMG systems were introduced in 1950, and the first digital systems were introduced in 1973.4 Since 1993, standard software and hardware components are used to record, analyze and document EMG data.4

What is the structure of a muscle?

EMG is a technique for evaluating and recording the electrical activity produced by skeletal muscles. This electrical signal is the result of the muscle being activated by the nervous system. The greater the stimulation, either by higher frequency firing of the motor neurons or greater recruitment of motor units, the larger the electrical signal will be.5

Zooming in, the motor neurons and muscle join each other at the neuromuscular junction, which is also known as the motor end plate.5 This is a specialized synapse, where the motor neuron joins with each muscle fiber.5 The region comprising all the neuromuscular junctions is called the innervation zone.6 From this innervation zone, the action potential propagates to either side of the muscle.6

Zooming in at the microscopic level, a motor unit comprises a motor neuron and the muscle fibers that it innervates.5 The structure of a motor unit is visualized in Figure 1. It is the smallest functional unit of a muscle; each muscle has multiple motor units.7 Motor units are recruited in a particular order, referred to as recruitment order, as described by Henneman’s size principle.5 To generate small amounts of force, the nervous system recruits only small motor units.5 As the required muscle force increases, the nervous system recruits progressively larger motor units as well.5 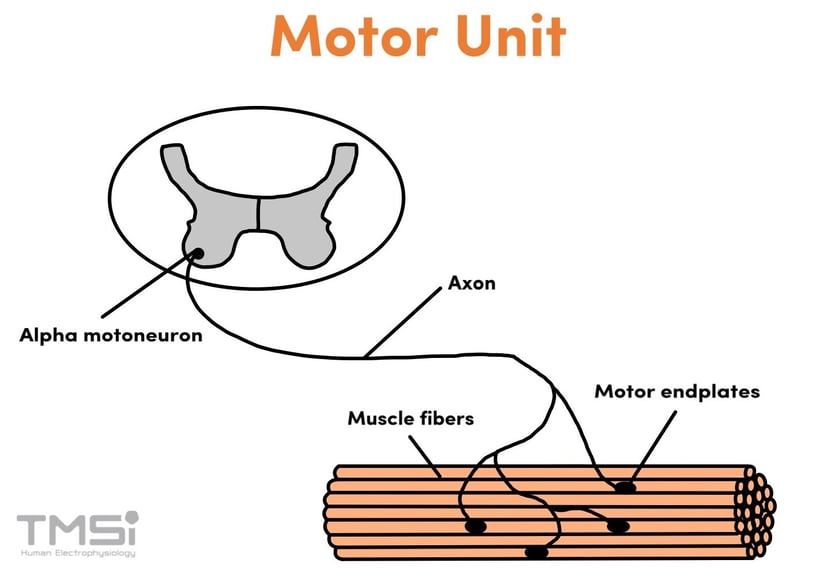 Motor units consist of muscle fibers. There are different types of fibers, but within a given motor unit all fibers are of the same type. Based on contractile speed, muscle fibers can be either fast-twitch or slow-twitch. Muscle fibers are not only distinguished by their speed of contraction, but also by their fatigue characteristics. Slow-twitch fibers tend to be resistant to fatigue, while fast-twitch fibers fatigue quickly. Generally, fibers are categorized as Type I (slow, fatigue-resistant), type IIA (fast, moderately fatigable) and type IIB (very fast, highly fatigable).5

What are the characteristics of an EMG signal?

EMG measures the sum of the electrical activity of multiple motor units; these are the motor unit action potentials (MUAPs).6 This is observed as a bipolar signal with a symmetric distribution of positive and negative amplitudes (mean value equals zero).7 Raw EMG spikes are of random shape.7 The observed signal is influenced by the recruitment of the motor units and their firing frequency, as shown in Figure 2.7

The amplitude range of an EMG signal is 0-10 mV (-5 to +5) before amplification.3 The amplitude has the potential to provide a measure of the magnitude of muscle force, but this relationship is complicated by both the character of the measured EMG and the muscle mechanics.8 Typically, the frequency of an EMG signal ranges between 6 and 500 Hz, showing the most frequency power between 20 and 250 Hz.7 An EMG signal is influenced by the firing rate of the motor units, which, in most conditions, fire in the frequency region of 0 to 20 Hz.3 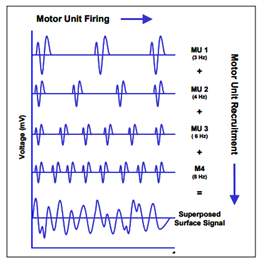 Figure 2: Visualization of the influence of the motor unit firing and recruitment on the superposed surface EMG signal.7

What is maximum voluntary contraction (MVC)?

A measure often used in EMG is the maximum voluntary contraction (MVC). The MVC is the maximal force-generating capacity of a muscle or group of muscles.9 The MVC is used to measure and evaluate muscle strength9 and provides a physiological reference point.10 The MVC is often used to normalize EMG signal7 and other muscle contractions are then expressed in the percentage of the MVC.10 This makes comparison of signal patterns within and between study participants possible.11

What are types of EMG?

There are several types of EMG. The most important ones are surface EMG (sEMG), high-density EMG (HD-EMG), and needle EMG. They differ in the placement of electrodes and number of electrodes used and therefore, in the data obtained. One of their differences is the scope of the technique. 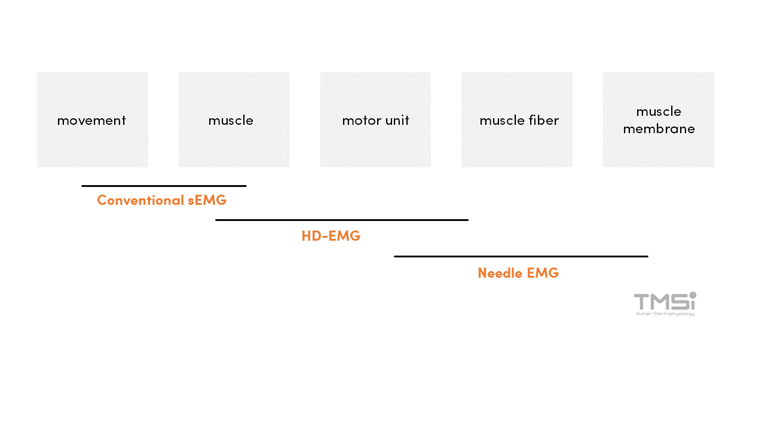 Surface EMG (sEMG) is a non-invasive technique to measure muscle activity where surface electrodes are placed on the skin overlying a muscle or group of muscles.13 In clinical neurophysiology, the use of surface electrodes is widely used to record compound MUAPs.12 Besides this clinical use, sEMG is used to record on-off switching of muscles and to estimate muscle force during voluntary dynamic contractions.12 sEMG consists of a single bipolar signal from two electrodes placed on one muscle.12 This technique does not allow for single motor unit information, and proper data quantification is needed, especially when simultaneous recordings from multiple electrodes need to be interpreted.12

High-density EMG (or HD-EMG) is a non-invasive technique to measure electrical muscle activity with multiple (more than two) closely but evenly spaced electrodes overlying a restricted area of the skin. The configuration of the electrodes can be either in a linear array or in a 2D matrix. Besides temporal activity, HD-EMG also allows spatial EMG activity to be recorded, thereby expanding the possibilities to detect new muscle characteristics, especially the evaluation of single motor unit characteristics.12

For needle EMG, the electrodes are inserted into the muscles. The electrodes are mostly used to evaluate motor unit function.12 Single motor unit information can be recorded rather easily with needle EMG because the distance between the active muscle fibers and the needle electrode is small.12 As needle EMG records signals invasively, the signal characteristics, and thus the amplifier requirements, differ quite significantly from regular sEMG measurements. Needle EMG only records activity from a small area in the muscle.14

What are applications of EMG?

EMG can be used in several fields. As mentioned previously, needle EMG is used in clinical neurophysiology as a diagnostic tool. HD-EMG has been more research-focused. Besides clinical use, EMG is used in rehabilitation research, sports sciences, kinesiology, and ergonomics.12 At TMSi, we focus on body mechanics and robotic control.

In summary, EMG is a tool used for evaluating and recording the electrical activity produced by skeletal muscles. It is the sum of the electrical activity of multiple motor units (MUAPs). An EMG signal is a bipolar signal with a symmetric distribution of positive and negative amplitudes. There are several types of EMG, including surface EMG, high-density EMG, and needle EMG. Applications of EMG include body mechanics and robotic control.