Explaining the characteristics of alpha, beta, theta, and delta waves seen on EEG

What are brain waves?

Throughout daily tasks, your brain is firing with neuronal activity. The neurons can fire randomly or in a synchronized manner. These synchronized, rhythmic electrical pulses from communicating neurons are called neural oscillations, or brain waves. For these signals to be detected from the cerebral surface, a large number of neurons must be synchronously active.1 When the signals’ amplitude is high enough, they can be detected from the cerebral surface with electroencephalography (EEG). There are different categories of brain waves, which are characterized by their differences in frequency and amplitude. The four main brain waves that are recognized are: alpha, beta, theta, and delta waves. These waves can be seen in Figure 1. 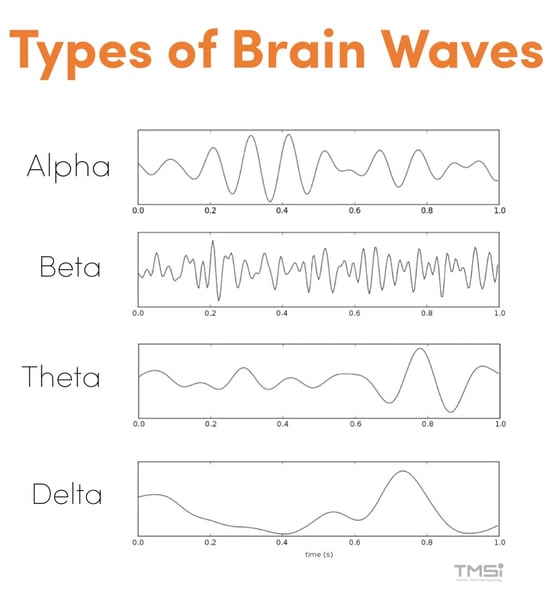 What are  the characteristics of alpha waves?

Alpha waves have a frequency of 8-12 Hz. They can be seen in states when a subject is awake, relaxed, and resting. These waves are seen most intensely in the occipital region (visual cortex) when a subject has their eyes closed. The synchronization is caused by blocking visual input to occipital areas. In addition to the occipital region, these waves can also be recorded from the parietal and frontal scalp regions.1

They are waves with high amplitudes (voltage 20-200 µV) and are therefore easy to distinguish in the EEG. Modern research suggests multiple, distinct mechanisms that are responsible for producing alpha waves, such as thalamocortical loops, rhythmically firing pyramidal cells, and local interneurons.2 Alpha waves disappear when the subject is asleep. When the subject is awake and the attention is directed to some specific type of mental activity, the alpha waves are replaced by asynchronous waves of higher frequency but lower amplitude.1

What are the characteristics of beta waves?

Beta waves typically occur at a frequency of 14-30 Hz. These waves are small and faster and can be seen in states of intellectual activity, focus, and alertness. Beta waves can be separated into two subgroups: beta I and beta II. They are most prominent in the parietal and frontal regions of the scalp, as this is where the abovementioned mental tasks take place. Beta waves are less easy to identify in EEG compared to the other types of brain waves, as they do not have a regular signature waveform. Studies have shown that beta waves are involved in somatosensory processing and motor control.3

What are the characteristics of theta waves?

Theta waves have a frequency of 4-7 Hz. They can be seen in states of daydreaming or light sleep. These waves can be seen in the parietal and temporal regions. They are more pronounced in children or adolescents and less prominent in adults. Functionally, they have been linked to coordinating the process of memory storage.4 Moreover, they are associated with inhibition of elicited responses.5

What are the characteristics of delta waves?

Delta waves have a frequency of 0.5-3 Hz. These waves have a low frequency and relatively high amplitude. They can mainly be seen in states of deep sleep. Delta waves only occur within the cortex, independent of activities in the lower regions of the brain.1 Delta waves during sleep are thought to play a role in transferring learning and long-term memory storage. Lastly, delta waves intensify (higher amplitude) and occur more often when a subject is sleep-deprived before going to sleep.1

In summary, brain waves originate from the summed synchronized synaptic activity of cortical neurons. They can be categorized into alpha, beta, theta, and delta waves based on their frequency and amplitude. These brain waves provide insights into brain activity. Since the first discovery of the alpha waves by Berger, many studies have shown a close link between perceptual, cognitive, motor, and emotional processes and the type of oscillations in the EEG.6