Explaining the International 10-20 System for EEG

The 10-20 system of the international federation is an internationally recognized method that uses anatomical landmarks to standardize the placement of electroencephalography (EEG) electrodes.1 The system is based on the relationship between electrode location and the underlying area of the cerebral cortex whilst ensuring that all brain regions are covered. 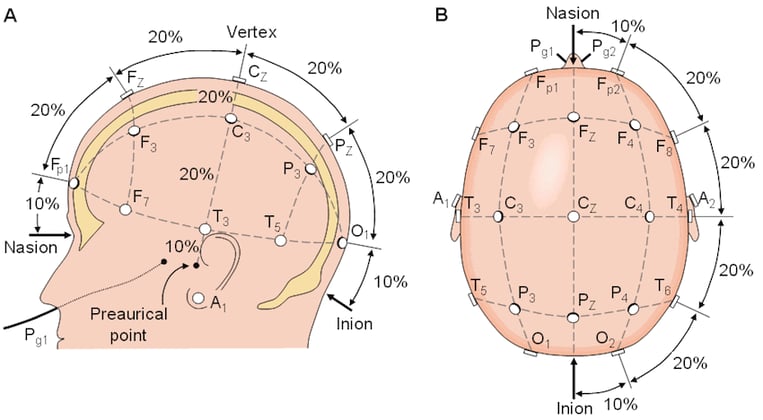 Electrodes have a name that traditionally consists of one or more letters and a number. An example of the 10-20 system layout with electrode labeling is shown in Figure 2.

Figure 2: The electrode layout of the 10-20 system (left) and corresponding brain regions (right) (pictures adapted from photo and photo).

What do the letters in the 10-20 System represent?

The letter of the electrode stands for the general brain region that the electrode covers. From front to back, the electrode letter labeling is as follows: Fp (pre-frontal or frontal pole), F (frontal), C (central line of the brain), T (temporal), P (parietal), and O (occipital). Electrodes lying between these lines combine multiple letters, ordered from front to back. This applies to the higher-density systems, which is further explained in the next section. In addition, the letters M and A are sometimes used to refer to the mastoids or earlobes respectively. Typically, these locations are included to serve as a (offline) reference for signal analysis.

What do the numbers in the 10-20 System represent?

Why is electrode placement in the 10-20 System important?

Repetitive results can only be obtained when the headcap is placed correctly, i.e., if the electrodes cover the desired location on the scalp. Therefore, it is important to choose the right size headcap and to check if Cz is in the middle between the nasion and inion and the two preauricular points.

What are the extensions to the 10-20 system?

In addition to the 10-20 system, there are other higher resolution systems such as the 10-10 system (10% system)3 and the 10-5 system (5% system).4 These systems are an extension of the original 10-20 system, and use additional electrodes between the existing system, resulting in a higher density measurement. An example of the 10-10 system can be seen in Figure 3.

In summary, the 10-20 system allows for equal inter-electrode spacing and the electrode placements to be proportional to skull shape and size. Knowledge of this system and the method behind it allows for a consistent and replicable method of recording EEG. This system is used in various applications, including sleep studies, EEG exams, and other EEG research and clinical studies.