How to reduce time on treatment advice within cognitive impairment research

At TMSi, we are proud to support high-quality research. In this user story, we would like to highlight a talented researcher: Valentina Barone. Three years ago, she started her PhD at the University of Twente in clinical neurophysiology, in collaboration with TMSi. She uses TMSi’s SAGA amplifier to record EEG signals to make a prediction of outcomes in neurological disorders. Therefore, we are happy to share her interesting research.

What did her research investigate?

Valentina studies two patient groups that suffer from cognitive impairment: children with epilepsy and older patients with mild (traumatic) brain injuries. Generally, patient cognition is assessed with neurophysiological tests that are time-consuming, require experts, and are somewhat subjective. With her research, Valentina aims to provide treatment advice to neurologists in a shorter time. She uses neurophysiological markers to make a prediction of the outcome in neurological disorders. With the measurement set up she created, she aims to enhance the usability by making the experience not just shorter in time, but also more comfortable for patients.

What makes her research unique?

The test Valentina designed focuses on a specific aspect of cognition: visual attention. Visual attention is tested using a computerized game, which can measure reaction time from the appearance of a visual stimulus up until a button press. The game is based on an existing neurophysiological test, called ANT. Reaction time itself is not enough to have an exhaustive picture of the cognitive impairment of a patient. The novelty of this test is the creation of a metric of markers through the addition of EEG measurements and eye-tracking. With EEG, biological markers such as event-related potentials are measured (with respect to the presentation and processing of a visual stimulus). For the traumatic brain injury patients, she also looks at the alpha band power, as this has been shown to be related to attention.

What is the experimental set-up?

The set-up of the game can be seen in figure 1. The subject is seated in front of a laptop that displays the game. After the start of the game, the stimulus (an image of a monkey) appears somewhere on the screen at random times. The subject interacts with the task with a gaming controller: based on the appearance of the monkey, one or two buttons need to be pressed. During this game, EEG is measured with a gel headcap, and the eye movements are tracked with a screen-based eye tracker positioned below the screen. The EEG data were collected with the SAGA system. For Valentina, great signal quality is the most important aspect of an electro-physiological amplifier. Additionally, she prefers having the raw, unfiltered data available. 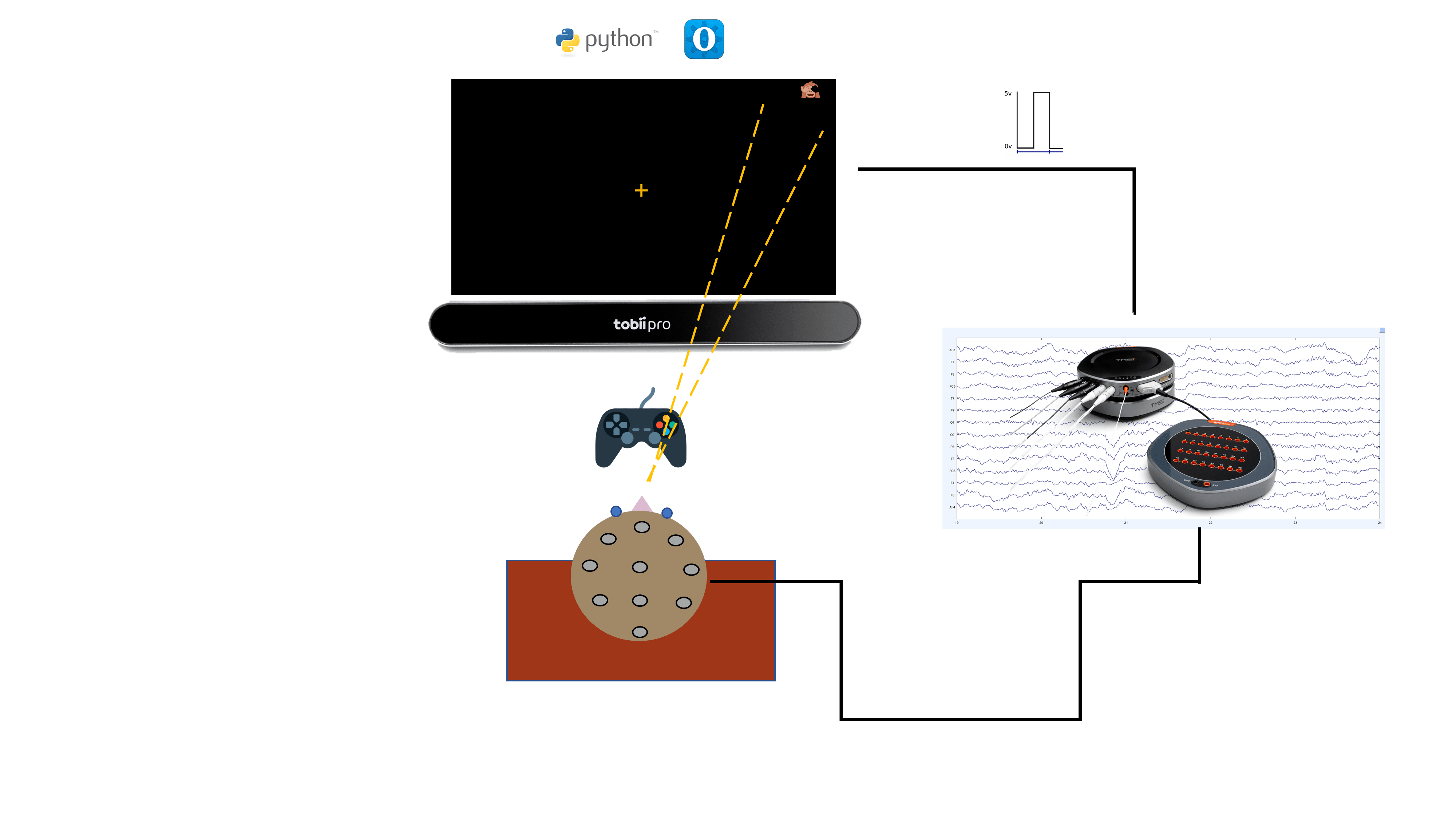 As stated previously, Valentina studied two patient groups: children with epilepsy and older patients with mild (traumatic) brain injuries. For the children with epilepsy, she was able to determine if patients experienced any seizures during the recording by asking a trained neurologist to evaluate the EEG. In figure 2, a first result of her study is shown. Eye movements are shown before, during and after an absence seizure. The recording starts after the appearance of the stimulus and until the button is pressed. In this example, the subject cannot reach the target stimulus with their eyes during the seizure (epochs 126,127,128). Absence seizures can, therefore, impair eye movements and visual attention in some subjects.

For the traumatic brain injury (TBI) research population, she looked at the difference in alpha band power during eyes closed (EC) and eyes open (EO). Alpha power in resting EEG is an index of the neurological status of a subject. If the alpha power does not decrease consistently after the eyes open, this can indicate that the alpha rhythm has been influenced by the trauma. In figure 3, the comparison is made between two groups: subjects with traumatic brain injuries in the acute phase (TBI_A, i.e. 24 hours from trauma) and subjects in the subacute phase (TBI_S i.e. 4-6 weeks from trauma) with acute traumatic brain injuries. As the difference for the TBI_S group (11 μV2/Hz) is significantly larger than the TBI_A group (4 μV2/Hz), it appears that after some time, the effects of the trauma on the alpha power lessens. 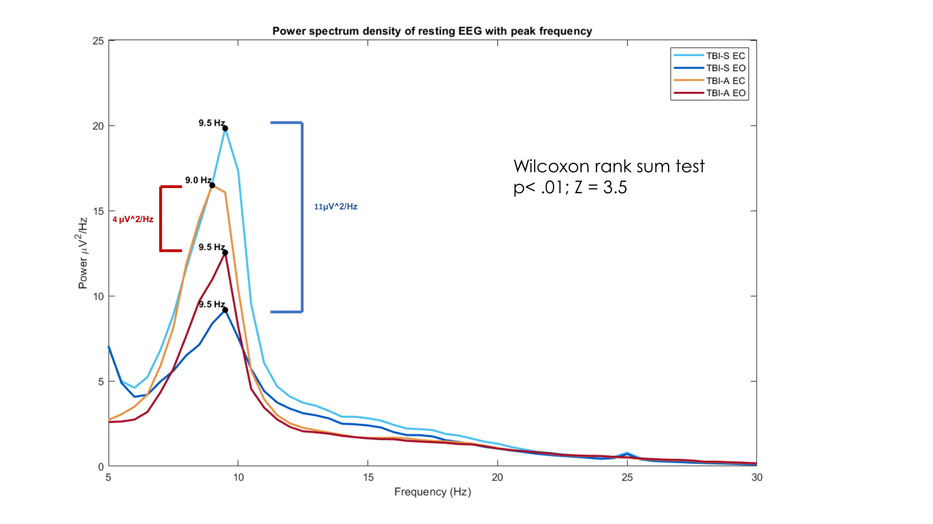 What are the next steps?

In the future, she hopes her research can also be used as a tool to give advice to patients who suffer from cognitive impairments. Sometimes, neurologists advise epilepsy patients not to ride a bike or a scooter out of consideration for their safety. For patients, this can be hard to accept. However, in order to raise the understanding of the risk for the patient, neurologists can use objective measures determined from the test to help support their argument.

At TMSi, we are happy to be able to assist in Valentina’s research.

Keep an eye out for Valentina’s upcoming paper!